2020 Census data highlights population and diversity trends in Keller, Roanoke and Fort Worth

Richardson’s population has grown in number and diversity since 2010, according to decennial census data released September 16. (Courtesy of Adobe Stock)

If all roads once led to Rome, perhaps they now lead to Texas – and, in particular, to the metroplex.

The recently released data from the 2020 census suggests so anyway.

In Tarrant and Denton counties alone, the combined population has grown nearly 24.8%, from just under 2.5 million to just over 3 million, since 2010.

By combining the towns of Keller, Roanoke and Fort Worth, a similar story emerges. Together, the three cities are approaching one million inhabitants and have experienced a combined population growth of 23.9% since 2010.

Due to growth, the landscape of the region is one with increased density. Several census tracts within the 76244 ZIP code—in northeast Fort Worth, just west of Keller—have 10,000 or more people per square mile, for example.

Leonard Firestone represents District 7 on the Fort Worth City Council. His district bisects 76244, along with council member Cary Moon’s District 4. Firestone said the data underscores the momentum happening in his district and across the region.

“It’s a really exciting time – clearly people want to be here and they want to put businesses here,” Firestone said.

As new faces continue to populate the area, 2020 census data suggests that these faces are less homogeneous than before.

Gary Fickes represents Precinct 3 in the Tarrant County Court of Commissioners. This neighborhood includes Keller and parts of Fort Worth as well as northeastern Tarrant County. Fickes said local leaders need to be aware of these changing populations.

“Every time you start to see [demographic] change, that’s significant,” Fickes said. “You have to pay attention to that, and you have to be sure that you are doing what you can do, as local government, to be sure that you are providing the correct and appropriate services, and in a correct and appropriate way that corresponds to the people who live in a particular area. 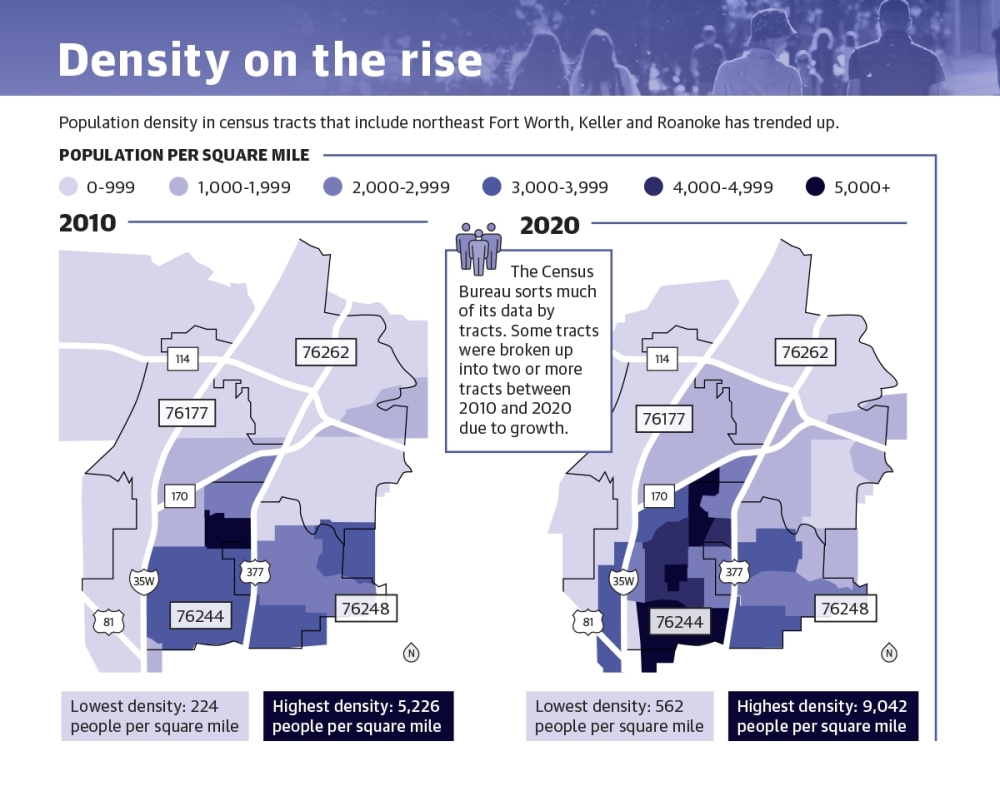 For Keller, Roanoke and Fort Worth, the broad trends of population growth and increasing diversity are shared. The story specifics for each city see more variance though.

Population growth over the past two decades has been significant in Keller. Since 2000, Keller has grown 67.4%. But City Manager Mark Hafner points out that most of that growth happened between 2000 and 2010. The city has grown just 15.5% over the past decade and Hafner said it’s slowing to approaching its projected population of 50,000.

“During this time [2010-2020]we have really prepared, and we don’t see as much of a problem compared to 2010 [census] to 2020 [census]”, Hafner said. “Most of our roads were [the] good size…we’ve had pretty good success with our land use planning and future land use plan.

Roanoke has seen a population growth of 62.1% since 2010 and 244% since the turn of the century. City Manager Scott Campbell said that in addition to the city’s growth, his staff must be aware of regional growth that is driving traffic through the city and its popular restaurant district.

“We probably have over 55,000 people here during the day,” Campbell said. “Roanoke is a bit of an anomaly when you look at their nighttime population compared to the daytime services we try to provide to a lot more people.”

In northeast Fort Worth, in ZIP Codes 76244 and 76177, Firestone said it’s critical to keep the region’s growth momentum going. Firestone said the consequence of job creation is that there must also be housing and infrastructure to support this job growth, specifically citing roads and transport as essential.

“I would say for … my family, with four lovely young kids, getting around town and going to activities around town, traffic has been the biggest challenge,” Firestone said.

As a Keller-based real estate agent, Rodney Eiland is, in some ways, at the forefront of the region’s growth that the 2020 census data underscores. Anecdotally, he says he continues to meet newcomers from areas with higher taxes.

Based on these interactions, Eiland said he’s observed that relocations and business expansions in the area, whether it’s Charles Schwab in Westlake or Black & Decker in Fort Worth, have a ripple effect that attracts even more new residents.

“Businesses move here, and I think what a lot of people miss out on with big moves, whatever big business you get, you also get a lot of support businesses moving,” Eiland said.

Tarrant County Administrator GK Maenius has seen the county grow 45.9% since 2000, adding more than half a million people during that time. He said the business-friendly environment in the region, along with its relatively affordable price, is fueling growth.

“People come here because jobs are available and jobs pay enough to create a living wage — and that’s what people are looking for,” Maenius said.

This kind of growth had real implications for Maenius and his team. Some of the county government‘s main areas of responsibility include transportation, the judiciary and public health — and Maenius said each of those areas has expanded in size and scope as the county’s population has grown.

“Quite frankly, that’s why we come in early and stay late every day,” Maenius said.