If we are serious about unraveling and correcting what puts some populations at such great risk of poor economic and social outcomes, we must find ways to accentuate the benefits of marriage.

Whether marriage matters or not has long been a hot debate in the culture wars. So approach it in economic terms instead. Few could deny that at-risk children in low-income households would benefit from living with two married, law-abiding parents who bring home considerably higher incomes. Census data shows that this is what marriage does, especially for black women with children.

The 2020 census data shows median income was remarkably 173% higher for black married couples with children compared to single black women at home with children. Hispanics, Asians, and whites also enjoyed substantial gains in household income from being married, although the benefits were somewhat lower.

Based on the 2020 census data we reviewed, a black married couple with children had a median income of $94,493. In contrast, a black female head of household with children but no spouse present earned a median annual income of just $34,544.

The marriage bonus is particularly important for black households with children because only 38% of black children under the age of 18 in the United States in 2020 lived with two married parents, according to US census data. This compares to 61% of Hispanic children, 75% of white children and 87% of Asian children. 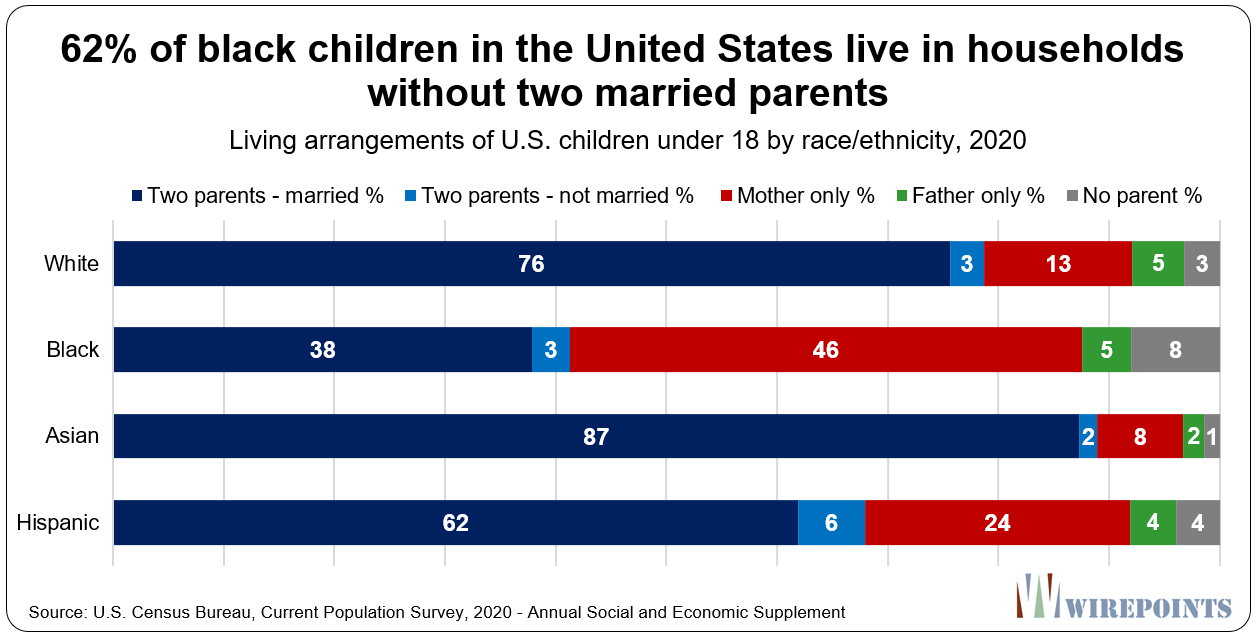 Data from the Annie E. Casey Foundation shows that in these 27 reporting states, the percentage of black children in single-parent households ranges from 79.1 in Wisconsin to 72.2% in Illinois (4th highest) to 49.7 in Minnesota. 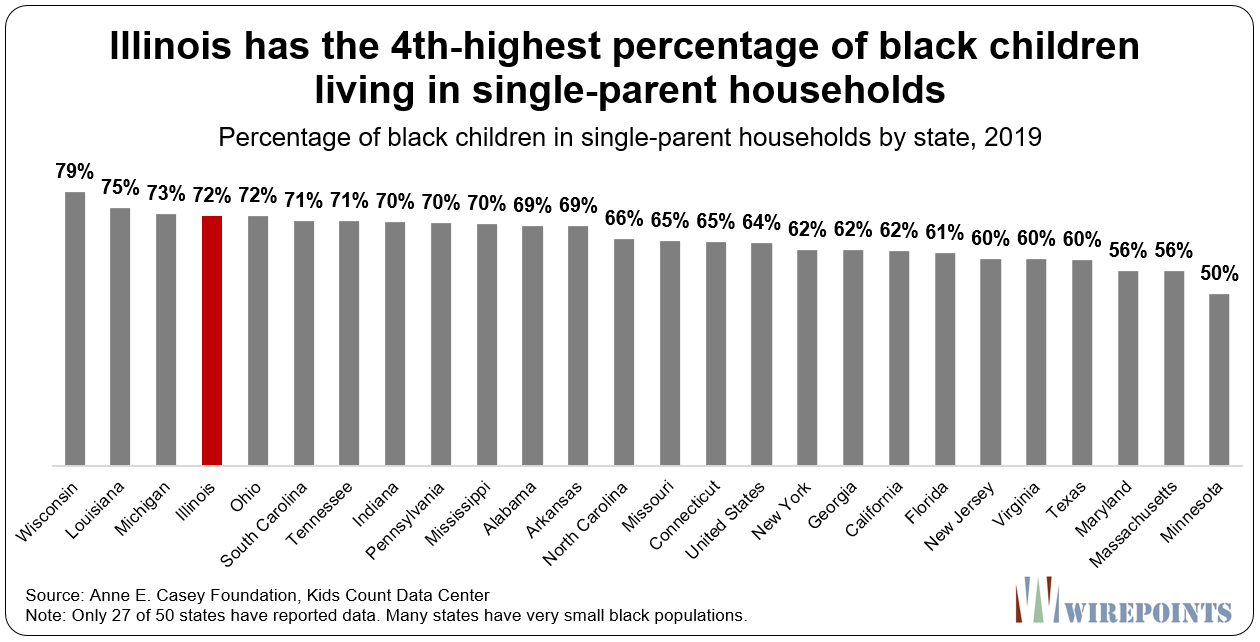 Of the three groups that could be assessed on this basis, whites received a 66% marriage bonus, blacks 39%, and Hispanics 25%. There were not enough unmarried Asian couples with children to be included.

To increase household income, become marriageable; then get married

A caveat is in order. Our term “marriage bonus” might seem to imply that simply by getting married, parents of children will earn more – of course, it’s not that simple. Indeed, the decision to marry between two unmarried biological parents or future parents depends on several factors.

Considerations include perceptions of the other partner’s character, reliability, faithfulness, parenting ability, earning potential, and work ethic. These sorts of things add up to something called “mariability”. Being able to meet the requirements of sealing the deal means that the household will already be better positioned for larger incomes. Therefore, the maxim could be: “to make yourself richer, first make yourself more marriageable”. And then get married.

Marriage coincides with much less poverty

We also sought to analyze the relative advantage of marriage at the other end of the income scale: avoiding poverty. We have examined a different set of 2020 census data and found that among adults living with related children under the age of 18, married couples fared significantly better than any other type in avoiding poverty. The effect was particularly pronounced among black adults living with related children under 18.

Only 8.2% of married black adults with one or more children were in poverty compared to 37% of black adult women with no spouse but at least one child. There were similar, but slightly lower, poverty avoidance margins among whites, Latinos and Asians between female household heads and married couples, with one or more children. The Census Bureau uses poverty lines that differ by family size and age of members. 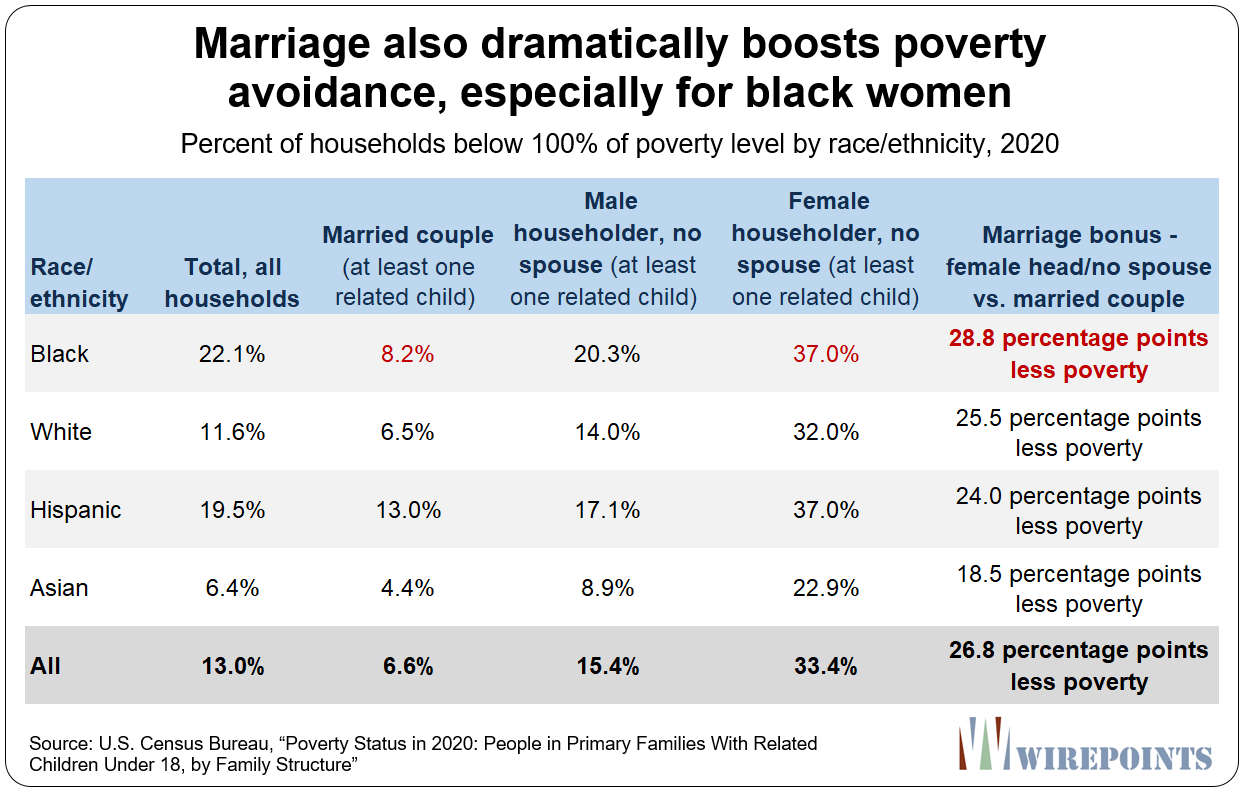 It is clear that marriage helps children

Admittedly, there are cases where single parents have done a remarkable job of raising their children to be successful adults. It is also true that some toxic marriages harm children and in such cases they may be better off living with one parent.

But that doesn’t change the broader focus of the data. Children deserve the extra care, health, academic success – and especially the extra financial support – that come from strong marriages and living in two-parent households.

Children born to single mothers tend to have less education, lower income and employment status. Their marriages are more difficult, they divorce and more often fall prey to depression. The negative effects continue. Now, thanks to recent US Census data we have analyzed and shared here, it is clear that the financial disadvantages of single-parent households relative to the earnings of married households with children are profound.